A filling replaces part of a tooth that has been lost due to accidental damage or because of tooth decay. The most common type of filling is dental amalgam, made from a mixture of different metals. Dental amalgam fillings are often used on your back teeth as they’re hard-wearing. If you need a filling for one of your front teeth, your dentist may suggest a tooth-coloured (white) filling.

Why would I need a Filling? 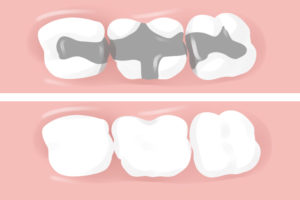 Fillings are needed when there is decay in the tooth creating a cavity (hole) in the tooth. If this isn’t treated then bacteria can work its way into the tooth leading to infection and disease. If left untreated this becomes more and more painful and may lead to tooth loss if completely left untreated.

Amalgam Fillings
Amalgam FillingThese are the classic silver grey fillings which are so common. These fillings are not as aesthetically pleasing and attractive as their white filling counterparts however, generally speaking, we are able to preserve more of the natural tooth structure if we use an amalgam filling.

Composite or White Fillings
White composite fillings are a model alternative to the old Grey amalgam fillings. Generally speaking these fillings look far more aesthetically pleasing and blend in with the natural teeth around them. One minor problem with white fillings is that they could have a tendency to wear at a higher rate than the surrounding teeth, this means that it is possible that the filling could wear away. Composite white fillings are much more popular alternative to amalgam fillings and are increasingly becoming the dental filling of choice in most practices.

Porcelain Fillings
The proper dental term for these is porcelain inlays however they perform the same function as a filling. Although porcelain sounds as though it is not very strong, this is actually far from the truth. The porcelain inlays that are used in dentistry are in fact made of an extremely high-strength feldspar quartz mixture which, when laminated or bonded onto the tooth, is extremely strong.

Gold Fillings
Gold fillings are also not as common nowadays, this is generally due to the cosmetic and aesthetic properties and more recently due to the price of gold! However, from a dental point of view gold is a perfect material. Gold is extremely malleable which means it can be easily formed to fit extremely accurately into the cavity created when we removed the decay. It is also extremely smooth which means that the opposing teeth are not worn away, as can be common with some other materials for fillings. Gold is also completely inert, so it does not react with the body and is completely accepted by the oral environment without any problem at all.

How long do fillings last?

This really depends on the type of filling you’re opting for. Tooth-coloured (composite) fillings are much more popular as they are discreet and blend in with the natural teeth, however they are often viewed as being less durable when compare to their metal counterpart.
Typically, composite fillings can last between 10 and 12 years. Amalgam fillings last a little longer, usually around 15 years.

How much do fillings cost?

The cost for our dental fillings varies depending on the material used and the size of he cavity to be filled. Our prices for fillings start at €80 for silver amalgam and €90 for white porcelain.

To learn more about our dental fillings at Dun Laoghaire Dental give us a call on 01 2809576 or or contact us at info@dunlaoghairedental.ie to arrange a consultation 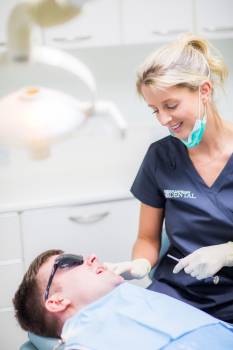